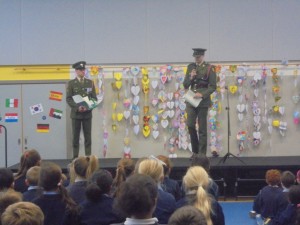 2016 is the 100 year anniversary of the 1916 Rising. As part of the celebrations St. Mary’s school received an Irish flag from representatives of the Irish Army. It was presented to the oldest and youngest students in the school and members of sixth class read the Proclamation. There will be more celebrations to follow along with the raising of the flag later in the year.